America’s Got Talent has a new winner. (Spoliers ahead.)

On Wednesday night, the talent competition featured a round of final, live performances and the winner was Mayyas.

The Lebanese all-female alternative dance group collected the $1 million prize and the opportunity to headline a residency at the Luxor Hotel & Casino in Las Vegas. The group was founded by Lebanese choreographer Nadim Cherfan.

The finale also featured a performance from the Black Eyed Peas and Chapel Hart and Darius Rucker performed, “Something to Talk About.”

Sellars and Mayyas also performed together.

“There are no words to explain to you what we were feeling over here,” Vergara had said, calling the performance, “the most beautiful, creative dancing I’ve ever seen.”

She also took to Twitter after the finale to write: “I’m so proud Mayyas. You deserve this.”

Vijay Deverakonda sure knows how to charm the ladies.

The ‘Liger’ star has finally replied to Sara Ali Khan‘s confession about wanting to date him in a promo of Karan Johar‘s chat show ‘Koffee With Karan’. Proving to be a total charmer, Vijay shared the promo clip on his handle and replied to Sara in a note that read, “I love how you say ‘Deverakonda’. Cutest. Sending big hugs and my affection (heart emoticon).”

His response comes a day after the video of the actress’ candid confession was posted online. In the new and final season of KJo’s chat show, Sara, who shared the coffee couch with Janhvi Kapoor, was asked, “Sara, give me the name of a boy you feel like you want to date today.”

Early 2021, Sara Ali Khan took to her Instagram handle to officially share her fondness for Deverakonda when she met him at Karan Johar’s party. She attached a sticker to a selfie with the hunk and wrote, ‘Fan Moment’.

The Telugu star, who shot to fame with his role in ‘Arjun Reddy’ will make his Bollywood debut in ‘Liger’ which will see him share the screen with Ananya Panday. The film also marks boxing legend Mike Tyson‘s Bollywood debut. The film will release on 25 August 2022 in five languages, including Hindi, Tamil and Telugu.

Vijay recently left the ladies swooning over his jaw-dropping poster that saw him posing in the nude while covering his modesty with a bouquet of roses.

Mitta Antony was on the verge of giving up on her career as a make-up artist when the Film Employees Federation of Kerala (FEFKA) Make-Up Union finally decided to give her a membership this week. But, that decision, making her the first make-up woman to get a membership in the union, comes after years of rejection, struggles and disappointment. When she had applied for a membership eleven years back, she was rejected.

The recognition which comes after working as a make-up artist in 37 films will pave the way for more women to come into the field, says Ms. Antony in an interview to The Hindu on Wednesday.

Entry to the field

“During my younger days, I used to wonder at the transformation that Mammootty underwent for Ponthan Mada or the variety of looks that Kamal Haasan experimented with for many films. Although I did not know back then that I would be a make-up artist, I have always been fascinated by the possibilities of transforming appearance using make-up. I had initially taken up conventional courses for higher education and dropped out, only to take up diploma courses in make-up. The first chance I got was to do the make-up for a musical programme on a channel in 2006-07. In the following years, I did more courses and worked in Arabic, Hindi, Tamil and Bhojpuri movies,” she says.

A first in India

After her membership request was denied in 2011, she realised that no woman has been recognised as a registered make-up artist in any film industry in India. A few other women, who were being denied opportunities, were already fighting the case, leading to the Supreme Court in 2014 striking down a rule that prohibited women from working as registered make-up artistes.

“I continued to work in documentaries and some government projects. Then in 2017, I got a chance to do make-up in Udalazham, my first Malayalam movie. In 2018, Anjali Menon offered me the chance to do the make-up for Koode, which turned out to be a big break for me. Without her offer, I wouldn’t have managed to enter the mainstream Malayalam industry and work for a big banner. Since then I have worked in films like Shyamaprasad’s Kasiminte Kadal and Don Palathara’s 1956, Central Travancore. But, it has been a struggle to survive, as I have not been getting enough work to take care of my two children. I was about to give up and start a business when this official union recognition came along. Now, I won’t give up. It is my dream to become a part of major productions,” says Ms. Antony.

The Women in Cinema Collective (WCC), which has been supporting her, hailed FEFKA’s decision as a historic victory. The WCC expressed hope that this step will pave the way for more women to receive recognition as make-up artists through union cards and find equal opportunities in the Malayalam film industry. Though many women are working as personal make-up artists of actors, none of them can be the official make-up artist in a movie, unless they get a union membership.

Gray, best known for her 1999 hit song “I Try,” seemed to anticipate the backlash during an appearance that aired Monday on Fox Nation’s “Piers Morgan Uncensored.“

“I will say this and everyone’s gonna hate me but as a woman, just because you go change your [body] parts, doesn’t make you a woman, sorry,” Gray said after Morgan brought up the issue of trans athletes in sports.

“Right, you feel that?,” Morgan responded.

“I know that for a fact,” Gray replied.

“Being a little girl is a whole epic book, you know? And you can’t have that just because you want to be a woman,” she told Morgan, later adding that she “doesn’t think you should be labeled transphobic just because you don’t agree.”

Midler similarly sparked controversy when she tweeted on Monday, “WOMEN OF THE WORLD! We are being stripped of our rights over our bodies, our lives and even of our name!”

“They don’t call us “women” anymore; they call us “birthing people” or “menstruators”, and even “people with vaginas”!,” her tweet reads. “Don’t let them erase you! Every human on earth owes you!”

Both of their comments did not go over well.

“What is it about ‘womanhood’ that TERFs [a term defined as a feminist who excludes the rights of transgender women from their advocacy of women’s rights] like macy gray and bette midler are so desperate to cling to?,” writer Arielle Tschinkel tweeted. “Trans women existing doesn’t make me any less of a woman, no matter how different our experiences may be. it’s just ridiculous at its core honestly.” 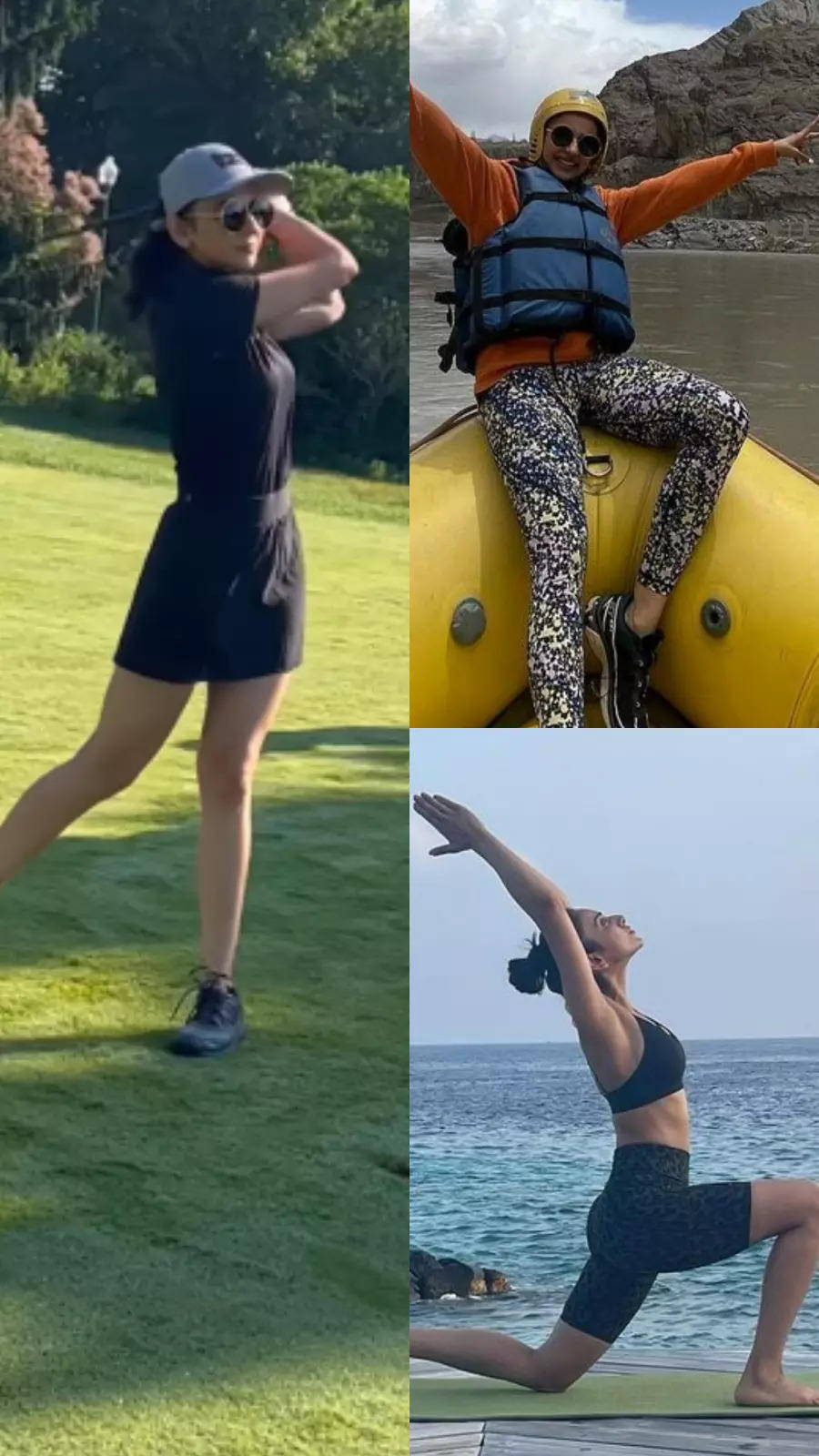 Rakul is quite enthusiastic about fitness and she loves keeping herself active. Take a look at these pics…

Veteran filmmaker Tarun Majumdar passed away in Kolkata on Monday. He was 91 and was undergoing treatment at the State-run SSKM hospital since June 14. The filmmaker was put on ventilator support on Sunday when his health deteriorated and he breathed his last at 11.17 am on Monday.

Majumdar was among the last of the great film directors from West Bengal who created a niche of their own, beyond the trinity of cinema legends such as Satyajit Ray, Mrinal Sen, and Ritwik Ghatak.

The filmmaker, who was known for his sensitive portrayal of middle-class life and the human condition, is a four-time National Award winner and a Padma Shri conferree. Majumdar was born on January 8, 1931, in Bogra (now in Bangladesh). His father, Birendranath Majumdar, was a freedom fighter.

Majumdar directed his first film Chawa Pawa (1959), starring Uttam Kumar and Suchitra Sen, when he was only 27 years old. He then joined the directorial team Yatrik, which also included Sachin Mukherji and Dilip Mukherji. In 1962, the team came out with Kancher Swarga, which won the National Award for the best feature film in Bengali.

Majumdar will also be remembered for the aesthetic picturisation of songs in his films, particularly the use of Rabindra Sangeet. The director is also known for giving opportunities to the then fresh faces in the Bengali film industry, such as Moushumi Chatterjee, Mahua Roychoudhury, Ayan Banerjee, and Tapas Paul.

Majumdar married actor Sandhya Roy, who acted in many of his films, however, the couple separated later. His last film, a docu-feature titled Adhikaar, was released in 2018. The film spoke about the struggles of the people working in the unorganised sector.

Filmmaker Gautam Ghosh, while recalling his decades-long association with Majumdar, called him a guardian who gave a lot of films to the educated middle-class to cherish. Ghosh said that Majumdar was very meticulous in his work and that he would not start shooting till all the props of the scene were in order.

Chief Minister of West Bengal, Mamata Banerjee, condoled the demise of the filmmaker and said that Majumdar was a versatile filmmaker who shined as a great example for filmmakers who aspire to make social films.

Meanwhile, Majumdar’s family members have said that he did not want his body to be taken to Randindra Sadan or Nandan, Kolkata’s cultural complex, and that he didn’t want wreaths to be placed on his body. His mortal remains, instead, will be donated to a State-run medical college for reserach.

Akansha Ranjan is currently vacationing in Munich. The actress then bumped into Athiya Shetty and KL Rahul there and shared a bundle of pictures from their meet-up.

In one of the photos, the ‘Ray’ actress was seen posing for the camera in a park. She looked pretty in a white crop top with a pair of denim jeans and teamed with a yellow jacket. In the other photo, Athiya and Akansha posed adorably while Rahul leaned towards them.

All of them donned their brightest smiles. Athiya looked cute in an off-white dress, while Rahul looked uber cool in a brown T-shirt.

Sharing the pictures, Akansha captioned the post, “All we need is somebody to lean on (two hearts, herb and family emojis).” Reacting to the post, Athiya wrote, “I just need my cortado. That’s all I ask for” and Akansha replied, “Please go to Spain Athiya. Ciao ciao.” Athiya responded with, “CRISPppppppP.”

KL Rahul and Athiya had traveled together to Germany recently for his groin surgery. The couple made their relationship official earlier last year.

The pair posted on their verified social media accounts about Barker’s recent hospitalization.

“I went in for an endoscopy Monday feeling great,” Barker wrote in a note posted on his Instagram stories. “But After dinner, I developed excruciating pain and have been hospitalized ever since.”

The Blink 182 drummer explained that during his endoscopy, he had “a very small polyp removed right in a very sensitive area, usually handled by specialists, which unfortunately damaged a critical pancreatic drainage tube.”

“This resulted in severe life threatening pancreatitis,” he wrote. “I am so very very grateful that with intensive treatment I am currently much better.”

Barker and Kardashian officially wed in May and hosted a lavish celebration in Portofino, Italy.
She also shared Barker’s note on her Instastories.

“Oh what a scary and emotional week it has been,” she wrote. “Our health is everything and sometimes we take for granted how quickly it can change.”

The entrepreneur and reality star wrote that she was “grateful to God for healing my husband” and “for all of your prayers for him and for us, for the overwhelming outpouring of love and support.’

“I am so touched and appreciative,” Kardashian wrote. “I am so thankful to our specialists, doctors, and nurses at Cedars Sinai for taking such wonderful care of my husband and me during our stay.”